By THE CITIZEN
More by this Author

Of the three charges, Kabendera was cleared of that of leading an organised crime gang and left with the money laundering and tax evasion charges.

Kabendera pleaded guilty to the charge of money laundering and was fined TZS100 million, which he paid, thereby securing his freedom.

The court also ordered him to pay TZS250,000 as a fine for evading taxes, another charge to which he pleaded guilty.

He was further ordered to pay another TZS172 million as compensation, which he will clear in the next six months alongside the TZS250,000.

Earlier on Monday, the office of the Director of Public Prosecution earlier accepted Kabendera’s plea bargain application, paving the way for the Kisutu Magistrate’s Court to begin hearing his case.

The court previously lacked jurisdiction to hear such cases.

State attorney Faraja Nchimbi informed resident magistrate Janet Mtega of the DPP’s acceptance of the plea bargain when the case was mentioned on Monday.

As the world struggles to recover from the cruel death of George Floyd in the hands of the Minneapolis Police, the deceased’s baby mama has made an emotional plea for justice, sobbing as she insisted he was a good man “no matter what anybody thinks”.

With her six-year-old daughter Gianna clinging to her, Roxie Washington said she wanted all four officers involved in Floyd’s death to pay for the death, which has sparked fierce protests across the US and the world.

“At the end of the day, they get to go home and be with their families. Gianna doesn’t have a father. He will never see her group up, graduate. He will never walk her down the aisle.”

She made these remarks during a news conference at Minneapolis City Hall.

Floyd, 46, died last week in Minneapolis after police officer Derek Chauvin was filmed kneeling on his neck for at least eight minutes while arresting him for allegedly using a counterfeit $20 note at a shop. A day after President Uhuru Kenyatta convened a Parliamentary Group meeting at State House, Newly appointed Majority Whip Emmanuel Wangwe (Navakholo) wrote to 17 MPs demanding that they should show cause why they should not be removed from various departmental Committee.

If the discharge is effected, Kuria will lose his post as the vice-chairman of the Transport, Public Works and Housing Committee.

Other MPs listed in the ouster plot include Bomet County Woman Representative Joyce Korir, who is also the vice-chairperson of the Labour and Social Welfare Committee, Cornelly Serem (Aldai) and Robert Pukose (Endebess) who are vice-chairpersons to the Trade, Industry and Cooperatives and Energy Committees respectively.

Wangwe gave the MPs seven days to respond to his letter.

“I have so far collected 115 signatures,” he said, “I am confident that by tomorrow we will have at least 155.” 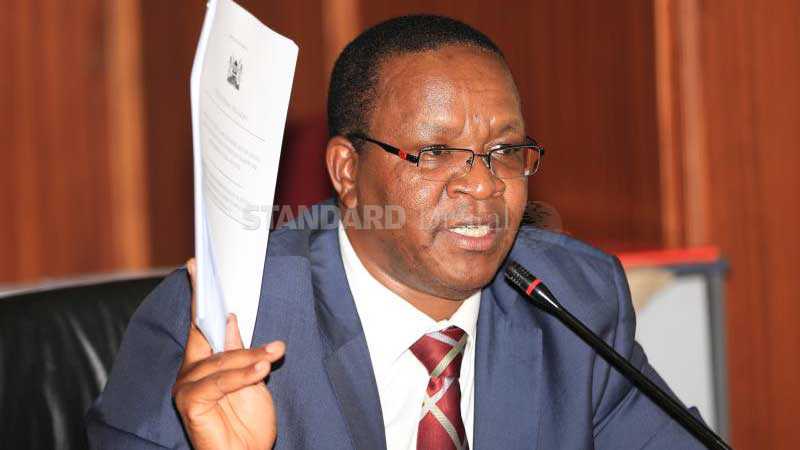