The seven confirmed cases are from Nairobi County bringing the total number of positive cases in Nairobi to 28. 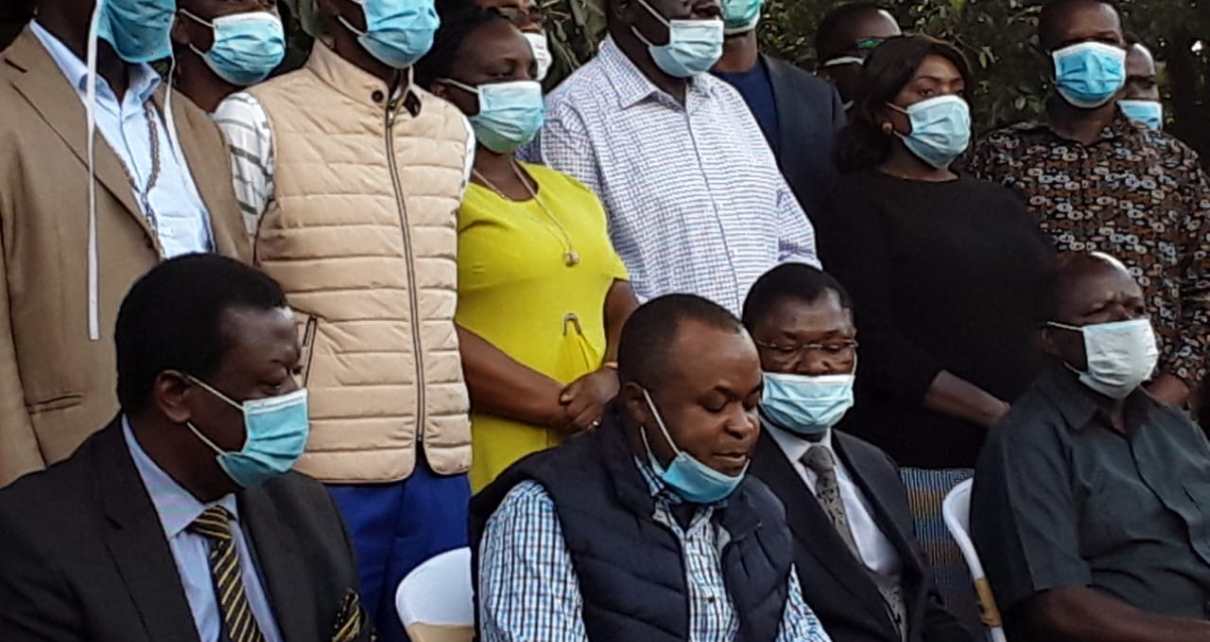 NairobiEvery time the Luhya community leaders have come to push for the unity of the region, members always ended up pulling towards the opposite directions.

“Ford Kenya! Simba, Ford Kenya, Usawa Haki na Ukweli (Equality Justice and Truth)”
So they struggled to sing, with voices forcibly high but evidently laced with indefinite uncertainty. The heavy blows in the Party had threatened to squeeze life out of the lion party.
The party coup, has thrown their mantra in disarray. Both sides crying foul over inequality, injustices and mischief.
Political struggles between the Bungoma Governor Wycliffe Wangamati and his Senator Moses Wetangu’la seem to sink the boat, threatening to end the party in Ford Kenya.
SEE ALSO: How ‘Kwekwe’ song lyrics are shaping Uhuru’s legacy
This situation now becoming just one of the countless futile efforts by the Mulembe nation to ‘unite’, a situation that has become an elephant in the luhya room.
Every time the Luhya community leaders have come to push for the unity of the region, members always ended up pulling towards the opposite directions.
According to the Kenya National Bureau of Statistics, the tribe is the second most populous, just some steps behind the Kikuyu community.
However, notwithstanding this fact, when it comes to voting, their seven million population, never seem to add up in the political matrix.
For more than four General Elections in the country, the Luhya community has been a house with different fathers. This being witnessed in recent turn of events.
SEE ALSO: Wamunyinyi has Ford Kenya Party DNA, says Dr Simiyu
The wrangles at Ford Kenya’s headquarters is the recent, among a myriad of unending divisions in the Luhya house, which has made them a laughing stock.
Recently, a faction in the Party led by Secretary General Dr. Eseli Simiyu launched a coup that ended at the Registrar of Parties’ office. This is after all sides claimed control of the Party.
These efforts, according to political pundits, will surely throw the region’s ambitions off the hook two years to the 2022 General polls.
The latest circus has forced the lion party to be run from two centers. One at the Party’s official residence at Ole Dume road and the other at Radisson Blue hotel.
In a recent rejoinder, the Moses Wetang’ula led camp belaboured on the reasons why they are the legitimate owners of the Party.
SEE ALSO: Wetang’ula pushed out as season of coups hots up
“Ford Kenya is still alive and is being run at its headquarters, “cried Chris Wamalwa, who later proclaimed himself the interim Party Secretary.

This contradicting his previous statement that status quo remains in the party as directed by the Registrar of Parties, meaning Dr. Eseli Simiyu is the still the substantive Secretary.
“He is a rebel! We cannot have power vacuum. That is why I now come in, “added Wamalwa.
The sharp voiced Kiminini legislator who was lately ousted as Minority whip in the National Assembly had earlier mentioned that a communique from Anne Nderitu who is the Registrar of Parties had directed the stay of the status quo.
SEE ALSO: NASA co-principal and Cotu boss responsible for Wetangula’s ouster, claims Musalia
“The leadership of the Party remains as it is until the Registry makes a substantive decision on the Party wrangles, “said Wamalwa.
It first started after a group led by Bungoma Governor Wycliffe Wangamati and the Party’s Secretary General Dr. Eseli Simiyu, decided to change the Party Leadership.
The camp accused the Senator Wetangula of gross misconduct and failing to champion unity in the party.
“Party members have lost trust in the party leader hence the need to replace him to develop the party,” said Dr. Eseli during a press conference.
The former Minority Leader in the Senate was also accused of failing to provide inspiring leadership to the party contrary to Clause 49 of the party’s constitution.
Also thrown out during the changes is party Organizing Secretary Chris Mandu in a meeting which Wetangula allies stormed out of the venue.
SEE ALSO: I’m still Ford Kenya leader, Wetangula maintains after ouster
In place, Kanduyi MP Wafula Wamunyinyi was enthroned as the Party Leader, in an alleged special National Executive Council sitting.
Recently, the Wamunyinyi side said they had submitted a dully signed document to the Registrar of Parties of those members who approved Wetang’ula’s ouster.
The team however, blamed their counterparts of issuing threats on the legislators allied to the Wangamati side saying they would lodge a complaint to that effect.
“We are going to the Police immediately to launch a complaint over threats meted on our members. Some have even been subjected to physical assault,” lamented Dr. Eseli.
This comes as a meeting was also held in Kitale that declared Kakamega Governor Wycliffe Oparanya and Devolution Cabinet Secretary Eugene Wamalwa as the community spokesmen.
The blessings of Luhya elders, has essentially been touted to give an exit notice to the current regional kingpins.
Former Cabinet Ministers Muskari Kombo, Noah Wekesa and Fred Gumo as well as Busia Governor Sospeter Ojaamong and Trans Nzoia Senator Michael Mbito also accompanied the duo on the tour.
“We want Oparanya and Wamalwa to be at the negotiating table and work with President Uhuru Kenyatta. However, we respect other leaders but if they digress, we shall just replace them like we have done and continue with our journey,” said Gumo.
Wamalwa and Oparanya said they would be meeting elders from all communities in the region to seek their blessings.
“We have a mission to put together the people of western, and our mission is to ask our people to support the Building Bridges Initiative (BBI), President Uhuru Kenyatta and former Prime Minister Raila Odinga in their efforts to unite the country,” Oparanya said.

The first tranche of funds meant to cushion Kenyan athletes from the economic impact of the Covid-19 pandemic has been released.

It is now about three months since sports activities in the country were put on hold, owing to the Covid-19 pandemic.

This prompted the government to come up with ways to cushion athletes against the financial impact of the pandemic, as their means of livelihood is no longer dependable upon.

The Ministry of Sports on Friday revealed that the stimulus programme is off to a good start, with Ksh 21.99 million having already been disbursed.

The Ministry of Sports has also expressed its commitment in regards to exploring more options to mitigate the effects of the pandemic.

The World 1500 Meters champion will be joined by his running partners from Rongai Athletics club; Commonwealth Games titleholder, Elijah Manangoi and 800m runner Edwin Meli, and they shall be competing against the Norwegian Ingebrigtsen brothers; Jakob, Filip and Henrik, in a2,000m event christened ‘Maurie Plant Memorial Race’, in honour of legendary Australian athlete Maurie Plant, who passed away in January this year.

The winner of the match-up will be the team with the best overall time for three runners, with the individual times set to count as well.

NAIROBI, Kenya Jun 5 – The woes in FORD Kenya party continued to escalate on Friday after the faction that staged Moses Wetangula’s ouster as the Party Leader re-filed the contested leadership changes at the Office of the Registrar of Political Parties in Nairobi on Friday.

FORD-Kenya Secretary General Eseli Simiyu alleged that the Wetangula-led group had resorted to intimidating some members of the National Executive Council (NEC) who he insisted backed the leadership changes made on May 31.

Simiyu accused Wetangula of sending threatening messages to some of the party members in a bid to coerce them into signing affidavits denouncing their support for his ouster.

“Our colleagues are actually sending intimidating statements and threats to the members of the NEC who were part of the special meeting that was held last month and they are trying to intimidate them into denouncing their support for the changes in the party,” he claimed.

The Tongaren lawmaker said it was unfortunate that Wetangula had opted to cling to power by all means instead of conceding to a, “democratically sanctioned process”.

He claimed that Wetangula had threatened to de-whip some ward representatives from their positions in their respective county assemblies if they will not withdraw their support for the change of leadership in the party.

“Elected MCAs are being threatened from being de-whipped from their position in committees in the county assemblies,” Simiyu said.

Consequently, the Tongaren lawmaker said that he will be recording an official statement with the police demanding for assurances of the safety of the NEC members even as he urged them to remain steadfast despite the threats.

“Our members should not panic, the law is on their side and we are going to report this to the police to make sure our NEC members are protected from the threats,” he said.

He told Wetangula to wait for the delegates conference to contest for the party leader position if he is still interested in it rather than engaging in side shows.

“We haven’t expelled him from the party, if he is still interested in the position, let him respond the accusations before contesting again,” he said.

Kanduyi lawmaker Wafula Wamunyinyi who was named as the Interim Party Leader stressed that the change of guard in the party was sanctioned by a majority of the members.

He noted that former party members including Former Webuye MP Musikari Kombo, Secretary-General of the United Nations Conference on Trade and Development Dr Mukhisa Kituyi and other members had welcomed the changes in the party.

“It is sad that our colleagues have now turned to threats and intimidations to the NEC members who participated in a democratic process of changing party officials, let them join us in moving the party forward,” he said.

Wetangula has remained adamant on retaining his position in the party insisting that his ouster was illegally orchestrated.

He went ahead to suspend Simiyu and Wamunyinyi from the pasty’s position of Secretary General and member of the National Assembly Agriculture and Livestock Committee respectively.

Wetangula has since accused ODM Party Leader Raila Odinga of orchestrating his removal from the party leadership and forcefully imposing the leadership changes, claims lieutenants of the former Prime Minister have dismissed.

Political Parties Registrar Anne Nderitu is expected to give a way forward on who has the rightful claim to the party after reviewing statutory documents filed by opposing camps.