By VITALIS KIMUTAI
More by this Author


Former President Daniel Moi is remembered for many things.

To his political allies, students and opponents, there is one trait that baffled all of them — his unparalleled ability to forgive those who wronged him.

Many politicians and professionals in the 24 years he was in power found themselves in Moi’s bad books.

All of them have different experiences, with some being rehabilitated and returned to the fold while others saw their careers go up in smoke.

But one trick that a majority did not know is that the former president, despite the demeanour he projected in public, readily pardoned those who sought his forgiveness.

“Moi was the epitome of humility,” said Mr Ruto, a former Council of Governors chairman.

“All you had to do when you fell out with him was to go underground for sometime, then appear before him and ask for forgiveness; you would immediately go into his good books.”

In fact, he reveals, one did not need to book an appointment but just appear in Moi’s Kabarak home and tell the security officers you wanted to meet and apologise to him.

“On several occasions, I would unknowingly wrong him but went back to him with the magic words – ‘I am sorry, Mzee, forgive me,”‘ revealed Mr Ruto, who served in Mr Moi’s Cabinet as assistant minister for Education, Agriculture and minister for Vocational Training and Environment.

“The only person who had learned Moi’s traits on forgiveness was nominated MP Mark Too. He would wrong Moi then in two months he would be back in the fold,” revealed Mr Ruto.

When Moi wanted to name a successor, Too was prevailed upon to step down and pave way for Uhuru Kenyatta to replace him.

Mr Ruto also said even after an attempt by former Nakuru North MP Kihika Kimani and a group of politicians to prevent him from succeeding President Jomo Kenyatta, he still forgave him.

“Many a time we would drive with Moi to Kihika’s home,” said Mr Ruto.

Former Cabinet minister Nicholas Biwott, now deceased, was among those who were considered untouchable in Moi’s regime, but he also fell out and was later rehabilitated.

Former Cabinet Minister John Koech also confirmed that Moi could easily forgive and welcome back to the fold politicians, to the surprise of many. 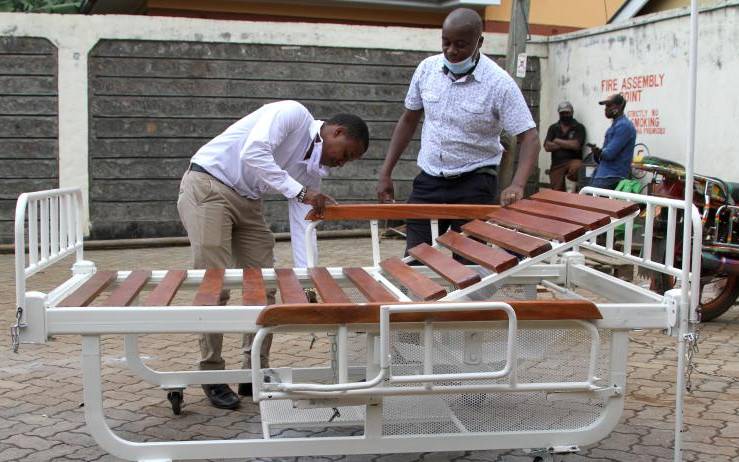 Mungai Gathogo (left) and Joseph Kamau, skilled welders based in Githunguri, explain the different features of their viral unique locally made hospital bed, during an interview with Standard, on Monday, July 13 2020. The two, are one of few artisans who have come out to showcase their skills amid concerns over lack of isolation facilities in counties.[David Njaaga, Standard]

Mungai Gathogo and Joseph Kamau have always been ones to spot opportunity long before others can.

In 2017, aged just 22, Gathogo contested for the Kiambu County senate seat while Kamau, Gathogo’s longterm friend and collaborator in their current venture ran for the County Assembly seat of Githunguri Subcounty.
Both were unsuccessful, but that did not deter them, as Kamau tells Standard.
When the Covid-19 pandemic struck, the duo saw a worthwhile opportunity. They swiftly registered a manufacturing and supplies firm, kicking off by supplying face masks and sanitizers. However, just a few months in, the business lost its profitability.
SEE ALSO: Recovered Covid patients ‘may lose their immunity’
“Everyone got into that business and it became saturated. So we thought about doing something else, an innovative thing where we would not have competition. That is when we decided to make beds,” says Gathogo.
Just three weeks ago, the Gathogo and Kamau ventured into manufacturing hospital beds, ideal for the Intensive Care Unit and High Dependency Unit, never mind that neither of them had prior experience in manufacturing.
“We are just entrepreneurs. When you see an opportunity you quickly rush into it,” Gathogo tells Standard from their workshop in Githunguri, Kiambu.
Kamau nods in agreement, adding, “We knew there is a need for these beds. Procuring this bed from China takes between three weeks and one month. Another advantage is that here we can modify the bed depending on the preference of the client”.
Mungai Gathogo (left) and Joseph Kamau, skilled welders based in Githunguri, explain the different features of their viral unique locally made hospital bed, during an interview with Standard, on Monday, July 13 2020. [David Njaaga, Standard]

More details are coming out on the final moments of a tragic incident that saw a Kenya Defence Forces (KDF) helicopter crash at Kanyonga in Kithyoko, Masinga Sub-county on Monday morning where two people died.

It has now emerged that one of the victims, who are yet to be named by the military, may have been alive in the moments after the military chopper crashed but did not get much needed help from locals due to coronavirus fears.

An eyewitness, Ms Ann Kaluki, told the Nation that she was going about her business on her farm when she saw a plane that was flying too low.

She then turned to her friend and told her that the plane looked like it was going to crash on them so they decided to run.

She said that the helicopter fell on nearby trees, raising clouds of dust before it crashed.

She noted that one pilot was still alive and was asking for help. However, because locals are afraid of Covid-19 and assume he would infect them, he did not get much needed assistance.

She said that a group of young men came running to the scene and asked them why they had refused to rescue him since he was alive.

“Those young men came and found him still strapped by his seat belt, but speculation on coronavirus and fear of the plane bursting to flames made them fear,” she added.

Another eyewitness, a young man, said that he was on his way home when they saw the helicopter nosedive but a tree caught its fall.

He said they rushed to the scene and found one person raising his hand, but says they could not assist as they had no idea how as they lacked first aid knowledge.

Another local, a farmer, echoed his sentiments.

“We as residents have no idea on how to rescue on such an accident…We just stood there fearing he could be infected with Covid-19,” he said.

The scene was later visited by security officials and it was established that a helicopter Reg AU003-539 belonging to the Kenyan army crashed at around 1100hrs.

“It had two souls on board (senior military officers of the rank of Major) both of whom died on the spot. SCPC and SCCIO Masinga at the scene while CPC and CCIO on the way to the scene,” read a police report.

He applauded the response by the Kenyan army, stating that they came in record time and evacuated the bodies.

“This was a training flight. On board were two pilots, who have since been evacuated from the crash site,” KDF said in a statement yesterday.

The chopper was one of six aircrafts acquired in January from the US.

Kenya: Impunity – How Aids Board Used Shortcuts to Hire CEO

The National Aids Control Council (NACC) hired a chief executive officer without the knowledge of its Human Resource Directorate, the Nation has established.

In a scandal that reeks of impunity in government circles, the Legal Department was not even aware of who drafted the advertisement calling for applicants, which was placed in the dailies in February. The Nation has seen emails and text messages from staff members in both departments that raise doubts about the process.

Following the controversy, the Ethics and Anti-Corruption Commission (EACC) last week wrote to the NACC board following complaints of irregularities and favouritism on the appointment of Dr Ruth Laibon-Masha as the new CEO.

“We received the complaints, and we have responded to the EACC,” said NACC Board Angeline Siparo.

NACC has not disclosed the criteria used to pick Dr Masha out of four deputy directors, some of whose resumes were way better. Ms Siparo directed the reporter to the EACC, who are yet to respond to the Nation.

On Tuesday last week, Ms Siparo sent a statement to the media about the appointment of Dr Laibon-Masha, taking over from Dr Nduku Kilonzo, who had been in office since 2014.

Those eyeing the position included Mr Dennis Kamuren, now the Deputy Director for Finance and Administration, an MBA holder from the University of Nairobi with 15 years in management, including working at the World Bank.

The other is Emmy Chesire, now NACC’s Deputy Director for Support and Coordination who has a PhD in Public Health and holds a Master in Education in Primary Health Care from the University of Manchester, United Kingdom. Emmy has over 29 years’ experience in public service having lectured at Kenya Medical Training College and at the United Nations.

Then there is John Kamigwi Mwangi, the Deputy Director for Policy, Monitoring and Research, a veteran but he was uninterested in the position as he is about to retire.

Dr Masha has worked for the UNAids Kenya office, ActionAid and Family Health Options Kenya. She has a PhD in Public Health from Jomo Kenyatta University. Her LinkedIn account says she has worked in the HIV space for 10 years and one month.

The transition from the leadership of Dr Kilonzo began last year and, ever since, the drama threatens to compromise the body’s work, such as fake emails created to circulate emails to staff with salacious accusations and threats of exposing the outgoing director.

Mid last year, then-Permanent Secretary of Health, Engineer Peter Tum, wrote to Dr Kilonzo, reminding her of the end of her contract. Mr Tum had asked Dr Kilonzo to prepare for her terminal leave in December.

Earlier this year, Dr Kilonzo attended a meeting in Naivasha for NACC’s senior management where she told her colleagues that she was about to leave.

In February, a vacancy announcement was placed in the national dailies. One of the requirements was “at least 15 years working experience and not less than 10 years in leadership at senior management level in organisations of similar status”.

In May, as Dr Kilonzo was about to leave, her term was allegedly extended by three months by PS Susan Mochache. After the deadline, the short-listed candidates were called for a zoom interview, one which Health Ms Mochache attended, instead of her representative, Benson Mugambi.

Sources said the board settled on an outsider because if they picked one of the deputy directors, the other two “would not have accepted it”.

‘He knows my name,’ Zuchu opens up on why she cried after meeting President Magufuli

Has my child been suffering from maggot infestation for six years?

Kenya: Impunity – How Aids Board Used Shortcuts to Hire CEO