Kenya risks disrupting the relative peace it has enjoyed if the increased cost of living caused by the increase in taxes is not sorted, MUHURI has warned.

Officials of the Muslims for Human Rights lobby group on Friday said: “the tax burden will soon break the camel’s back.”

“Peace and hunger do not go together. There can never be peace when people are forced to either pay through the nose to get a meal or go hungry,” chairman Khelef Khalifa said.

He spoke during a procession to mark the International Peace Day and also celebrate the organization’s 21st anniversary.

MPs on Thursday lost their fight to block the implementation of an eight per cent VAT on petroleum products.

President Uhuru Kenyatta has signed into law, the Finance Bill, 2018, which effects the new tax measures.

The changes will effectively result in an increase in prices of basic commodities like sugar, maize flour, among others.

The World Bank, in its latest data on poverty rates, shows that 17.4 million Kenyans live on less than Sh92 a day.

This is Sh100 below the International Poverty Line set at Sh191 per person per day.

More on this: 17 million Kenyans live on less than Sh92 a day — World Bank report

Khalifa and Muhuri executive director Hassan Abdile said the government should take the matter seriously for the sake of the country’s peace.

They said increasing the tax by eight per cent is not the solution to the debt that the country has immersed itself into.

“The problem is corruption. Deal firmly with corruption and you will not have top overburden the taxpayers with huge taxes,” said Khalifa.

The two said the government is wasteful and the tax burden only serves to widen the gap between the poor and the rich in the country.

This gap, they warned, is dangerous to peace in the country.

“Bad things are happening in our country. How do we talk about peace when people are miserable?” posed Abdille.

They said time has come for Kenyans to say enough is enough.

“Kenyans must decide. The government will not stop overburdening you with taxes if you keep quiet. We must take a stand and go to the streets,” Khalifa said.

These are the highest-rated African footballers on FIFA 19 – Politics – Pulselive.co.ke

The cost of being a teacher, refugee at Dadaab

For James Marungo Kariuki alias JM, who is eyeing the Juja parliamentary seat in the  Tuesday by-election, lack of media coverage does not seem to bother him.
Streetwise Kariuki, 37, is now tapping into his skills and business knowledge as he seeks to carve a niche in politics.
“I have been selling mutura along Kenyatta Road and Juja for about 10 years. This is where I get to hear problems facing Juja residents who cannot reach their representatives; these elected leaders disappear to the city once elections are over,” Kariuki says.
His day starts at 5am when he rushes to the Kiamaiko Market to buy meat and prepare it ready for meat pies, which he sells up to as late as 10pm.
His dream to be in Parliament started in secondary school where he nurtured it by holding leadership positions.
He attended Kihape Primary School in Mukuruwe-ini and remembers his barefoot journeys to study under a tree. He later joined Ngoru Secondary School where he sat his KCSE exam.
Kariuki later proceeded to study Information Technology but dropped out due to lack of fees.
He started off as a land agent and managed to convince over 3,000 buyers to purchase plots at Juja farm where he earned a reputation for his simple and unpretentious transactions.

The vendor has been conducting door-to-door campaigns and has also been reaching out to voters through social media.
In an interview with The Standard, Kariuki who once worked as a fruit seller using a mkokoteni, recalls his struggle to pay his school fees.
“I had to pay my own school fees for my computer classes,” he said.

Feza Kessy has been signed by DB Records owned by Nigerian artist D’Banj.

Feza Tadei Kessy is a musician who first made a name for herself on the popular reality show Big Brother Africa where she represented Tanzania in the show’s 8th season.

She was signed on the record label sometime last week and has since dropped her first single “Bless Me” which is currently streaming on YouTube. The song was produced by David Acekeyz Elumelu, while the video was directed by Clarence Abiodun Peters and edited by seunrankingg.

DB Records announced the news of her signing on their social media handles as did D’Banj.

“Bless me” is available to stream on all digital platforms.

Time ripe for a law on killer trailers 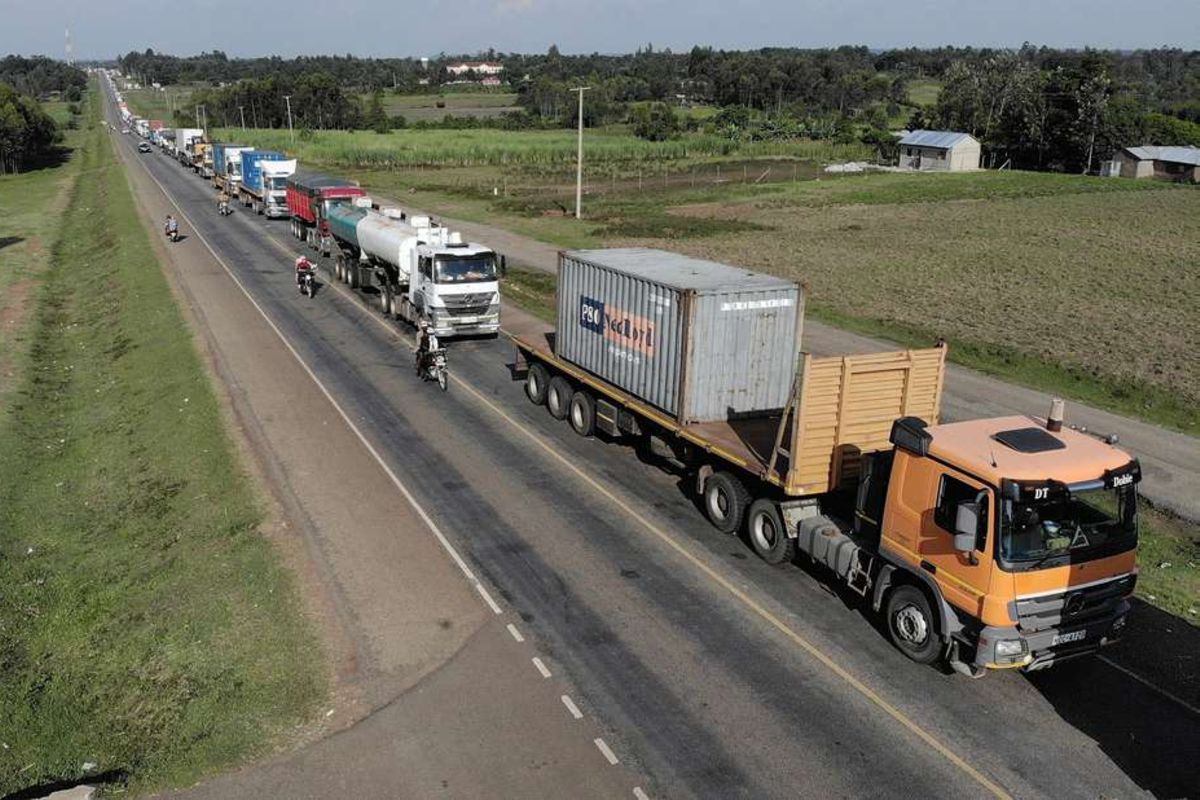 As friends and family of Allan Ngugi, who died in an accident on the Southern Bypass in Nairobi two weeks ago come to terms with his death, debate is raging on whether or not it is time for the government to make it mandatory for trailers to have underride bars.

Also known as impact guards, underride protection systems or Mansfield bars, are steel poles that are fixed below the platform bed of a heavy commercial vehicle from the back. They are designed to prevent smaller vehicles from sliding underneath a trailer in the case of a rear or side collision.

This is because unlike a car, heavy commercial vehicles do not have rear bumpers and their first point of contact from the back are their large wheels. During a collision between two cars, both of their bumpers help to absorb the impact.

However, most lorry trailers are 48 inches above the ground, while cars are mostly between 16 and 20 inches off the ground. If a car crashes into the rear of a heavy commercial vehicle, the entire length of the car would most likely crash underneath the trailer bed due to the huge height mismatch between the two vehicles.

Mr Ngugi, a programme manager at Trade Mark East Africa (TMEA), was rushing to beat the 10pm curfew when his red BMW X5 SUV rammed into a lorry ferrying goods. Because of the height difference between the two vehicles, Mr Ngugi’s BMW slid beneath the lorry, got trapped and was dragged for some metres. He died instantly.

“The lorry driver did not realise the crash has happened. He only noticed the lorry had fast lost pace, but because he was carrying goods, all seemed normal and he kept accelerating,” Lang’ata OCPD Benjamin Mwanthi told the Nation.

A postmortem indicated that the father of two died from excessive bleeding and fractures to vital bones like the ribs. In a requiem mass held at Ridgeways Baptist Church off Kiambu Road, Mr Ngugi’s friends eulogised him as a cheerful, resourceful and compassionate man who lived a happy life.

“These last couple of days I have been angry, hysterically crying and felt utter loneliness trying to understand why it had to be you,” said his sister Caroline Wanjiku.

But even as Mr Ngugi’s family comes to terms with his death, questions are being raised on whether the 39-year-old would have been alive today if the lorry that he hit from behind had some sort of barrier that would have prevented his car from sliding underneath it.

There have been similar accidents on Kenya’s roads and they mostly happen at night. Due to their weights, heavy commercial vehicles are usually slower when on the road. They are also more likely to break down, and unlike cars, they cannot be pushed to the side of the road.

When you add the fact that most of Kenya’s roads are poorly lit or unmarked, any heavy commercial vehicle that stalls on the road is a disaster waiting to happen.

In May last year Jimmy Wayuni Githinji was rushing to drop his musician friend Kibandi Jacksam when his vehicle rammed into the side of a lorry at the Kahawa Barracks exit of Thika Superhighway.

A year before Wayuni’s death, John Ng’ang’a alias John De Mathew was rushing home from a fundraiser when his black Nissan Navara rammed into a lorry that was laboring uphill at Blue Post Hotel on the Thika highway.

De Mathew’s vehicle, just like Mr Ngugi’s two weeks ago, slid under the lorry and was dragged for some metres. The musician, who was in his prime, was declared dead on arrival at the hospital.

There are many Kenyans who have met their deaths on the road in the same manner. A simple solution, according to motorists, and from conversations on the internet, is to force heavy commercial vehicles to install underride bars.

“This is what we should advocate. There is no reason Kenya does not have such a law when other countries do,” said Mr Peter Murima, the chairperson of the Motorists Association of Kenya.

“We don’t really need the underride guards, we just need to follow rules and regulations,” said Mr Ray Kombo, a motorist contributing to the conversation on Twitter.

The National Transport and Safety Authority (NTSA) promised to get back to us when we asked them whether they think it is necessary to have such regulation in place. Several countries, especially in the developed world, have made it mandatory for vehicles with a specific height clearance to have underride guards.

The United States National Highway Traffic Safety Administration was the first to introduce laws requiring trailers to have underride guards in 1967, after actress Jayne Mansfield, and two other passengers died when their car hit the rear of a trailer.

Ms Manfield’s death is the reason the underride bars are called Mansfield bars in the US. Today, all trailers built for use in the American and European markets must have Mansfield bars.

My second chance at life and love Eve woman

Kenya to receive$ 410 Million from IMF in the coming weeks

Time ripe for a law on killer trailers