Police officers with the new uniform during the National Policing conference at the Kenya School of Government on September 13, 2018. PHOTO | DENNIS ONSONGO

President Uhuru Kenyatta on Thursday unveiled the new uniform for police officers and Kenyans across the board agreed on one thing, they look awful.

President Kenyatta said the new uniform would enhance the visibility for the police officers.

Other changes announced by the president touch on the command, housing and training in Administration Police, Kenya Police and the Directorate of Criminal Investigations (DCI).

The reforms include integration of functions, rebranding, renaming and scrapping of some positions.

However, a cross section of Kenyans on social media took issue with the design and colour of the new uniform.

Hon Lee Makwiny tweeted: “Whoever designed this uniform should rot in Kamiti.”

Police officers with the new uniform during the National Policing conference at the Kenya School of Government on September 13, 2018. PHOTO | DENNIS ONSONGO

“He has unveiled corruption. Now someone will supply those uniforms and materials and over paid,” Ndungu Pato tweeted.

But there those who, like former Ikolomani MP Boni Kalwale, hailed the president for new uniform.

“Congratulations President Uhuru Kenyatta and IG Boinett for this new Kenya Police uniform. It is cool. Hope the officers will wear it with a new attitude in law enforcement,” he tweeted.

This new #NSCKE2018 @PoliceKE UNIFORM that President Uhuru Kenyatta brought with him from CHINA is ugly , even the cops wearing the rags are embarrassed they can’t face the CAMERA. ??
At least it has 2 large SUPER pockets for the Traffic bribes pic.twitter.com/RfEyEhtqd2

I believe it’s purely just a coincidence that at the same time that the Government was talking of introducing the same school uniform for all students, they were also planning to introduce new police uniform…#NSCKE2018 pic.twitter.com/C3j1vCxArO

President Uhuru Kenyatta launches the Kenya Police Away Jersey. Says the Home Kit was jinxed in the fight against corruption. Omen.

The list doing rounds on Social Media has placed Diamond at number 20 with a net worth of 5 Million dollars.

The artist has described the list as stupid further asking Forbes to Google him to know his worth.

“FORBES: next time Google me to know what am really worth of, before putting me on your Stupid Richest African Musicians List!!!” read the post.

Last week, Gospel Artist Ringtone took to his instagram page and disapproved with the list claiming he was the richest musician in East Africa.

Ringtone claims that he is the number one artist followed by Tanzanian musician Diamond Platinumz and Kenyan Musician Akothee.

With a membership estimated at 2.5million, Shree Lohana Mahaparishad advocates for acts of altruism that contribute to the wellbeing of humanity.

The institution has invested in various community-based projects world over from education, health, skills development centers and support for small businesses.

“In appreciation of the various social welfare as well as community service activities being undertaken by you, we take pride in appointing you as the Zonal president-Kenya of Shree Lohana Mahaparishad. May the Almighty give you immense strength to serve the mother body and the members of the community in all respects,” said Satish Vithalani the President of Shree Lohana Mahaparishad in a statement.

As the Zonal President of Kenya, Dr Kantaria will be responsible for growing the network and uniting members in supporting and advancing the philosophy of the organization through various acts of charity.

Dr  Kantaria is the first third generation Chairman of the organization after his granduncle Mr. G.D. Kantaria and his father Rajnikant Kantaria.

“This is a great honour and privilege for me. At a time when the world is facing unprecedented crises, service to humanity matters now more than ever. I plan to work with members of the Lohana community and people of good will in making Kenya and the world a better home for all of us,” said  Dr Kantaria in his acceptance speech.

Dr Kantaria has been a stalwart of social good as the Managing Director of Elgon Kenya, guided by the philosophy of the company that has been consistent in its philanthropy since it first set up shop over 120 years ago.

From building the Nyanjenga Primary School in Limuru in the 1980s for  poor children whose parents worked in neighbouring tea plantations in the 1980s, Elgon Kenya has, under the leadership of Dr Kantaria, invested in social causes across the education, health and agriculture sectors.

The company has been involved in the construction of an ultra-modern health facility based in Parklands Nairobi that seeks to make healthcare affordable by stemming the rising trend of patients seeking medical services abroad due to lack of facilities locally that can match the emerging health threats.

The 30-bed Kantaria ward at MP Shah Hospital that consists of private self-contained and duplex rooms in addition to general ward beds that was part of the investment by the Elgon Kenya directors, has been hailed as crucial in providing quality treatment at affordable cost.

In the education sector the company has invested in construction and expansion of learning blocks, books, paying school fees and contributing to school feeding programes, guided by the principle of its fore fathers; that of empowering the young ones who hold the key to the prosperity of the country. The focus is on children from humble backgrounds and in schools located in remote areas from Ngelani Ranch Primary School in Athi River to education centers in Mwingi.

At the post-secondary school level, Elgon Kenya has tapped in the skill of young people by encouraging them to embrace vocational training and encouraging young people to embrace education. The company has been working with St Joseph Vocational Institute for the poor in Mlolongo, that aims to equip the youth with skills on latest technology and development of micro and small enterprises, one of the pillars of the country’s economy. The institute has gone ahead to produce top notch automotive engineers and mechanics in the country.

Elgon Kenya has also been working with the elderly to alleviate their suffering by investing in homes for the aged. In one such home, Bethsaida Home for the Aged in Kitengela, the company has assisted the home in installing a three phase electricity line which has meant cutting cost of power. With the installation of power, the home has invested in boreholes that are now watering the horticultural produces grown at the 1.8 hectares land that is owned by the home.

Dr  Kantaria has also been the Governor of the Rotary club District 9212, a position that saw him promote the membership growth, increase the number of clubs within the district and contribution of funds to the Rotary. This, with the ultimate goal of assisting Rotary club advance its cause of alleviating human suffering and being a brother’s keeper.

The club was able to raise $1,200,000 for the Rotary Foundation Trust, the highest per capita raising in Africa. This was channeled to various charities in Kenya including scholarships for children, water and sanitation projects, maternal and childcare services, disaster relief and several other charities.

Dr  Kantaria is the patron of the annual National Farmers Awards  that seeks to reward the country’s best food producers while bringing the industry under one roof. The scheme has since its pioneer edition ran a youth category that has inspired a new generation of young farmers who are mentored by the winners.

The young soil celebrities, majority who have dumped suits for boots have turned their farms into demonstration and training plots leading to a farming revolution while creating numerous jobs in a country whose youth continue to grapple with unemployment.

Dr  Kantaria has previously been recognized by Kenya President Uhuru Kenyatta for the role he and his company have played through the awards to motivate farmers. 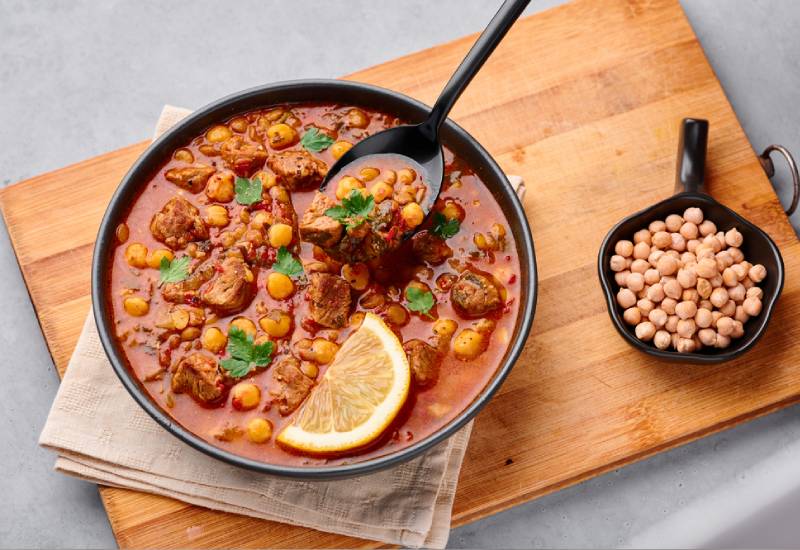 Let’s be honest, the weather has not been on its best behavior and we are all in need some comfort food, anything to keep the cold away.

But as it stands, tea and coffee can only work their magic for so long before they get boring and monotonous.

If you feel this way, then you should probably try the Moroccan soup, Harira.

This a popular traditional North African soup prepared mainly in Morocco and Algeria.

Harira comprises of a number of proteins, vegetables and spices that all help this soup burst out in zesty flavours.

You can have this bowl of soup as a starter, light snack or for the main course dish depending on what time of day you are preparing it.

Harira takes time before it achieves culinary perfection but the best part is that once you stir everything together, all that will be left for you is to wait as the heat does its magic.

Here is everything you will need to prepare this flavourful meal:

A glass of dry chickpeas, soaked and peeled

One tea spoonful of salt

One tea spoonful of black pepper

One cup of flour

Once all your ingredients and prepped and ready, the whole process is much easier from here on. In a large pot, heat your cooking oil and add your meat and let it brown.

Next, add your peeled chickpeas, tomatoes, onion, all the spices and three cups of water, stir for a little while and bring to boil. Let it cook on medium heat for about 30 minutes.

Once simmered, add your lentils, tomato paste and 7 cups of water to the mixture, cover and let it continue boiling for another 30-40 minutes.

When preparing this soup, you will need to regularly stir and taste your soup to adjust the ingredients and seasoning accordingly.

For that thick, creamy finish, the final step is to add your flour mixture moderately to your soup and stir constantly until you reach your desired consistency.

Let your soup simmer for another five minutes while stirring, this to ensure it doesn’t stick to the pot. Once ready, serve on a bowl and garnish it with coriander leaves and lemon wedges.

You can serve your bowl of soup with some bread, rice, noodles or pasta but you can also indulge this meal as it is. Happy cooking!

You should be humble, Tuju tells judges after BBI ruling