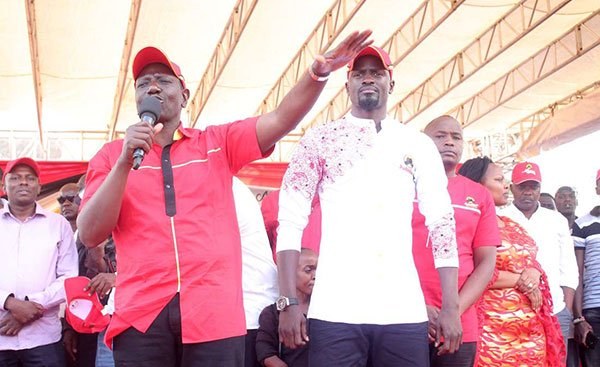 The hotly-contested Kibra by-election, which was presented as a test for the ‘handshake’ between President Uhuru Kenyatta and ODM leader Raila Odinga, has exposed the imminent realignment set to dominate politics ahead of the 2022 polls.

The ‘handshake’ survived the bruising battle but there is a clear indication things would not remain the same for major political players.

President Kenyatta gave the by-election a wide berth, presenting a chance to his close confidantes led by nominated MP Maina Kamanda to speak for him. He was only seen once with Mr Mariga when the aspirant went to State House, accompanied by Dr Ruto.

Mr Mariga’s loss left an egg on the face of the DP, who vigorously campaigned for the former Harambee Stars captain, only to end up with less than half of Mr Okoth’s votes.

A week later, Dr Ruto is still continuing with his attacks against Mr Odinga and the ODM party following the loss.

“Tinga and his party’s trail of political conmanship and deceit from Kanu, through Cord to Nasa and now heading to Jubilee, and litany of violence from ’82 coup to Kibra cannot be hidden behind BBI.

As a minimum, he must publicly renounce violence as a political tool and undertake to accept defeat,” Dr Ruto tweeted yesterday.

The DP has appeared isolated since the ‘handshake’ and the Kibra by-election appeared to give him an opportunity to test his popularity in Nairobi politics and whether he could stand on his own against a formidable team of Building Bridges Initiative supporters.

The DP will now have to go back to the drawing board. He will have to prove he is not against the ‘handshake’ as alleged by his critics.

The DP is likely to face stiff competition from Mr Odinga, who has fallen out with his National Super Alliance (Nasa) co-principals.

The three have emerged out of Mr Musyoka’s shadow and are ready to chart their own political future, which will deal a serious blow to the Wiper leader’s presidential ambitions.