Hackers have penetrated and defaced key government websites and IT systems including the crucial Integrated Financial Management Information Systems (IFMIS).

The breach which exposed government’s poor cyber security measures was reported on the afternoon of Monday, June 3.

READ ALSO: Huduma Namba: Mass registration will not be extended beyond Saturday, May 25

The Information Communication Technology (ICT) Authority was one of those its sites were hacked on Monday, June 3, 2019. Photo: ICT Authority.
Source: UGC

TUKO.co.ke confirmed IFMIS which is managed by the Information Communication Technology (ICT) Authority was inaccessible as at 4pm on Monday.

The hackers who collectively identified themselves as KURD Electronic Team successfully carried out the breach on a series of other sites including that of the National Development Implementation and Technical Communication (NDICT). 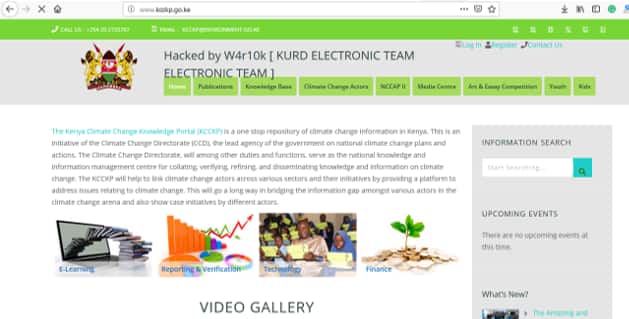 This came barely a month after a section of Kenyans raised concern on the level of government’s preparedness on matters cyber security when the National Integrated Identity Management System (NIIMS) was introduced to capture biometric data of citizens, commonly referred to as Huduma Namba registration.

As of May 23, more than 36 million Kenyans had registered for the Huduma Namba according to the government.

“After the end of the registration exercise on Saturday (May 23, 2019), we will embark on verifying the details and if we find out that you provided wrong information, for instance, wrong ID number or birth certificate, then you will be contacted and asked to register afresh,” said government’s spokesperson Cyrus Oguna.

READ ALSO: 66% of Kenyans have not registered for Huduma Namba, say the’re too busy – Ipsos poll

Although the Ministry of Interior and Coordination of National Government had allayed fears that the citizen’s data could be exposed to fraudsters, the latest incident of mass hacking is likely to raise doubts on just how safe the biometric data is.

The last major incident of hacking of government websites was reported in 2012 when foreign hackers brought down more than 100 sites.

The government, however, downplayed the latest cyber hacking incident.

Do you have a life-changing story you would like us to publish? Please reach us through [email protected] or WhatsApp: 0732482690 and Telegram: Tuko news.

I hate seeing children sleeping in the streets :Shanah Manjeru – On Tuko TV