Migori Governor Okoth Obado is set to be arraigned on Monday over the murder of Rongo University student Sharon Otieno.

The Governor was arrested earlier Friday and questioned on the murder of Ms Otieno at the headquarters of the Directorate of Criminal Investigations (DCI) on Kiambu Road in Nairobi.

Sources told the Nation that he was to record a statement.

Mr Obado was apprehended a day after detectives confirmed that Ms Otieno’s unborn baby was his.

Here’s where and when you can watch lesbian movie ‘Rafiki’

Speaking during the official launch in Meru County, AFA Director-General Kello Harsama said the authority has joined hands with various agencies as well as county governments to ensure full implementation of the regulations.

He said the move was solely meant to benefit potato farmers who have been impoverished by brokers and cartels in the sector.

He said after the launch, the exercise will be rolled out to other nine potato-farming counties as well as major markets in the country including Wakulima in Nairobi, Kongowea in Mombasa among others.

“Potatoes have been seriously mishandled by brokers who force farmers to use extended bags hence making losses. We are coming in to end this trend and we will sustain the regulations implementation exercise to ensure sanity in the sector,” said Harsama.

He said they were doing everything at their disposal to ensure they reclaim the agricultural sector from greedy cartels who have apparently held it hostage.

“We want Kenyans to be assured of regular food supply and this will be possible by ensuring we wipe out all the cartels who have invaded potatoes, carrots, tea, coffee among other agricultural crops,” said Harsama.

If this is not done, he added, the country will eventually have no farmers venturing into potato and other agricultural crops farming for fear of losses.

He said that the law requires that all food products for sale must be packaged in 50 kilogram-bag and those who flaunt this should be arrested and be treated like other law-breakers.

He said the authority has already sensitized farmers about the regulations through the county governments and local administrators.

Meru County Commissioner Kariuki Ngumo said they have mobilized their officers ready to reinforce the regulations as stipulated in the constitution.

The exercise is targeting all the value chains in the potato farming sub-sector.

ODM Party has withdrawn all its members from the Public Accounts Committee (PAC) at the Nairobi County Assembly accusing Jubilee leaders of meddling into the committee affairs.

In the letter to the office of the speaker, Minority Whip Peter Imwatok has cited intimidation and coercion by the Jubilee Party to remove current Chairman Wilfred Oluoch without knowledge of opposition leadership.

‘‘It has come to my attention and that of Minority House Leadership that the members of the Public Accounts Committee have been intimidating and coercing other members in the purported removal of current chairperson Wilfred Odalo to which it is the preserve of the Minority Leadership to nominate who qualified to be a member of any select committee,’’ the letter states.

Minority leader Michael Ogada has also warned those who have started collecting signatures for the removal of Peter Imwatok as minority whip saying it is not the party’s position.

‘‘You see that’s not party position, those things have not been sanctioned by the party they are doing them against the party,’’ Ogada told Ghetto Radio news

As it stands the County Assembly of Nairobi will have to stay without an oversight committee until the wrangles are settle.

Mr Seed is about to welcome another child but not with his lovely wife; but a side chick identified as Swabrina who he planted a seed in – no pun intended!

The story shared on Edgar Obare’s page caught many peoples attention and the fact that the side chick was ready to share more details through her gram; let’s just say bloggers have been having a field day!

Mr Seeds side chick and soon to be baby momma

So far the lady claims Seed sent her 4K for an abortion which backfired; and unfortunately he continues to insist on her terminating the pregnancy but Swabrina says she will not be risking her life for the second time.

As seen in a new QnA post shared on Swabrina’s page; most fans seemed interested in knowing how far along she is, and whether she will be keeping the baby.

Are you going to keep the baby Sweetie?

To which she responded by saying; 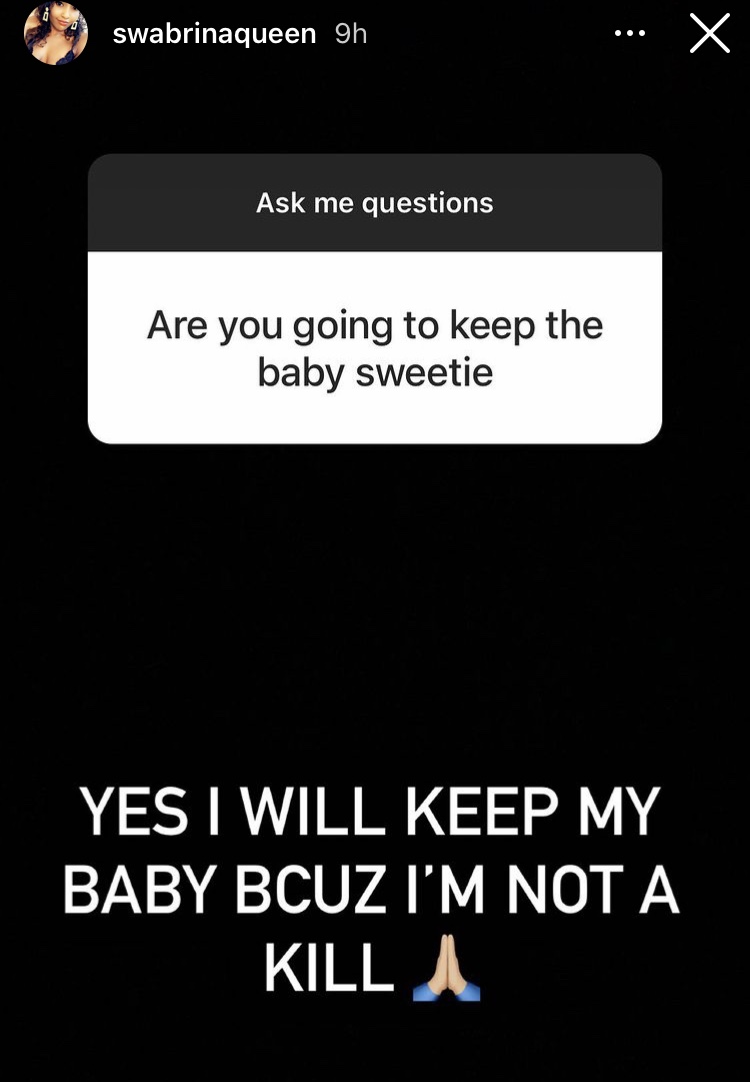 Not sure why everyone is focused on the pregnancy and not on the fact that people are sharing and no one is using protection?

Cancer: Why men should take a pregnancy test

Trump still banned from Facebook but board demands company review