With murder charges hanging on his head, Zachary Okoth Obado becomes the first governor to be in court over a capital offence.

Obado, 61, was, until the news of Sharon Otieno’s murder, an independent politician who was known to be humble, determined, unassuming and a quiet man.

Before defying odds and the ODM wave in Luo-Nyanza to become governor, Obado was a trained teacher. He had a stint as a director of the Kenya Sugar Board.

In 2013, Obado vied in the governor elections, and won alongside Deputy Governor Nelson Mahanga Mwita.

He was elected on a People’s Democratic Party ticket taking in mind that his region was and is still an Orange Democratic Movement zone.

Obado’s determination and will made him clinch the seat making him the envy of his other contestants.

His election was petitioned by Prof Edward Oyugi.

The latter was vying on an ODM ticket then. Following his case, the High court ordered for a recount of votes.

Even with the recount, Obado still maintained his lead, making him the governor of the county.

With all this passion to develop his county, Obado has not shied away from controversies.

His first term in office spelled out a tough battle, with graft allegations levelled against him and his county administration.

In 2015, the Ethics and Anti-Corruption Commission list of shame implicated Obado in cases of corruption.

The county chief was in the list over impropriety concerning Sh600 million through an alleged flawed tender process.

But the governor said the reports that he was involved in corruption were false.

He faulted reports in the media that he is among politicians who have corruption cases.

In September 2018, Obado was on the spot for running after it emerged that detectives are pursuing what is believed to be suspicious transfers of county funds to his children abroad.

The Star established that asset recovery agencies had frozen the bank accounts of Obado’s wife – Hellen Adhiambo, five businessmen, and three companies believed to be proxies or associated with the county boss.

In documents filed in court, the EACC says major Migori county suppliers who are alleged to be Obado’s proxies made huge international transfers to, among others, Obado’s children in Australia, Hong Kong and China.

In August 2016, a funeral service in Migori county was disrupted following a clash between Obado’s supporters and those of former minister Ochilo Ayacko.

Police and security officials were forced to shoot in the air several times, and armed police had to stand between the two groups as they booed each other down.

In April 2017, the county chief was slapped with a Sh2 million fine by the disciplinary committee of his party ODM, for violence that rocked the opening of a party office in Migori.

Goons said to have been allied to him violently disrupted a campaign rally led by Mombasa Governor Ali Hassan Joho to drum up support for his then opponent Ochilo Ayacko.

But the governor denied allegations that he sparked the violence during which Hassan Joho’s bodyguard was shot and injured.

The Governor said he did not plan or engage in any form of violence at Migori’s Posta grounds on April 3.

Read: [VIDEO] I had nothing to do with Migori violence, Obado tells ODM probe team

Apart from all this, Obado has now been charged with the murder of a Rongo University student Sharon Otieno.

He spent another night in remand at the Industrial Area Prison pending the ruling of his bond application today.

The charge is that together with others not before the court, he murdered Sharon at Owado area in Rachuonyo sub-county, between September 3 to September 4.

The county chief also faces the charge of aiding, abetting, and financing the murder.

Kapsabet Boys are kings in Rift Valley in 2020 KCSE exam 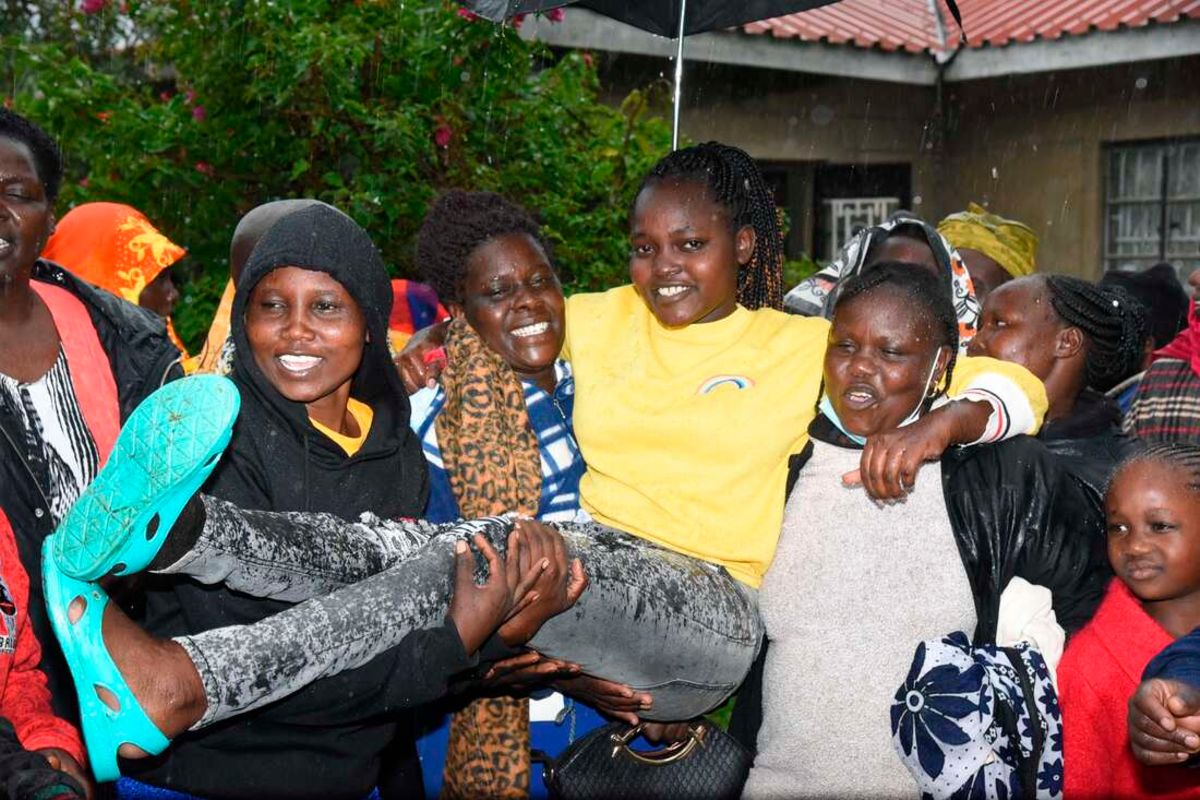 Kapsabet Boys had two candidates ranked among the top 15 students nationally in the 2020 KCSE exam.

The Nandi County-based school, which had produced the top student in the 2019 Kenya Secondary School Education (KCSE) examination, had its best candidate Kenneth Oranga ranked seventh nationally with a mean score of 87.049. His classmate Pile Ron George was ranked 12th. Kapsabet also produced the third best — 16-year-old Mutabari Frank Mugambi — who posted a performance index of 85.83.

“We are impressed with the results so far and it is expected to be remarkable as compared to previous years,” said Kipchumba Maiyo, school principal.

In 2019, the school registered a mean grade of 10.2 with 379 candidates sitting for the examination as compared to 352 candidates in 2020. But as Kapsabet celebrated its impressive results, yesteryears’ academic giants of the Rift Valley region, including Moi High School, Kabarak, Moi Girls High School, Eldoret, Nakuru Girls High School, Moi Forces Academy and Bahati Girls’ High School, had muted celebrations.

Nationally, Kenya High School topped the 2020 KCSE examination with a dominant presence on the list of the top 15 candidates nationally, maintaining a legacy of stellar performance even as some traditional giants missed from the list.

The school had six candidates on the list, and also produced the top girl nationally.

The best overall candidate, however, was Simiyu Robin Wanjala from Murang’a High School, who scored straight As with a tally of 87.334 points. He was followed by Wasonga Allan Udoma of Agoro Sare, who scored 87.173 points.

Sharon Chepng’eno of Kenya High School emerged the top girl in the country with 87.173 points.

“I thank God for this. We always put God first but also work hard. We received a lot of support from our teachers, who are very committed to duty, non-teaching staff and parents. We also have a chaplain to guide the students,” Kenya High School principal, Flora Mulatya, told the Nation.  Tears of joy freely rolled down her cheeks as Education CS George Magoha read the list of top performers. The school had 294 candidates.

The examinations, which were rescheduled from last year, were the first high school final tests to be administered under the Covid-19 pandemic. The pandemic notwithstanding, more candidates qualified for university admission than in 2019.

There was also an increase in the number of the top grade achievers.

The results, which were released by Prof Magoha at the Kenya National Examinations Council (Knec) headquarters in Nairobi, showed that 893 (0.12 per cent) of the candidates scored a mean grade of A compared to the 627 (0.09 per cent) candidates in the 2019 examinations.

“Their battle was fought with resilience and won with grace,” Prof Magoha said.

Among the qualifiers for university are 223 candidates with special needs. The top candidate with special needs is Kipkemoi Miriam Chepleting, who scored an A plain of 84.8 points. She was a student at Moi Girls High School Eldoret and was followed by Getugi Edgar Omoke (83.566) from Kisii High and Nebet Nyariki Ongubo (81.414) from Nyambaria High School.

The list of top performers, however, missed some of the KCSE giants of yesteryears and some much sought-after national schools. There was no place in the list for schools like Starehe Boys’ Centre, Precious Blood Riruta, Pangani Girls’ High School, Moi High Kabarak and Sunshine School, which have in the past topped the national charts.

The Education CS observed that the Form Four leavers will join universities and other tertiary level institutions as earlier anticipated before Covid-19 disrupted the school calendar.

Universities will admit the students in September. He instructed the Kenya Universities and Colleges Central Placement Service to start placement of the students immediately, while promising that the Higher Education Loans Board will be ready to advance loans to the students.

A total of 747,161 candidates sat the 2020 KCSE examination against a registration of 752,602, meaning that 5,441 did not sit the test. The high number of dropouts was anticipated as many candidates fell off the way after staying for seven months out of school due to the Covid-19 pandemic. Thousands of girls got pregnant while others got married.

“The number of candidates sitting exams (while pregnant) was the highest in history. We must get to the root cause of the problem,” said Prof Magoha, while blaming parents for neglecting their responsibilities when the students were at home.

Significant improvement in performance was recorded in 19 subjects compared to 16 subjects in 2019.

Knec acting CEO Mercy Karogo said the candidates sat the examinations in 10,565 examination centres while 25,135 examiners were involved in the marking, which was concluded last week. Knec staff worked round-the-clock over the weekend analysing and processing the results.

Whereas Prof Magoha said that no results for schools were cancelled, 287 candidates will not receive their results after having been adjudged to have been involved in examination irregularities.

The CS, however, fired a warning that more results might be recalled after conclusion of ongoing forensic investigations.

The Teachers Service Commission CEO Nancy Macharia said tutors involved in examination cheating will be removed from the teachers’ register if found guilty.

“We will act decisively and conclusively on errant teachers while upholding the rules of natural justice and the principle of due process as stipulated in the Code of Regulations for Teachers,” said Ms Macharia.

She announced that the commission will launch a biometric system to collect data of teachers in all schools to ensure that teachers involved in malpractices are punished.

The Kenya Meteorological Department has warned that the heavy rainfall being experienced in the country could increase in intensity to over 30-milimeters in 24 hours.

In a statement, the Deputy Director of Meteorological Services Dr. David Gikungu said that the most affected areas are highlands west of the Rift Valley, the Lake Victoria basin, Highlands East of the Rift Valley including Nairobi county, the North Western region of Turkana County as well as the South Eastern Lowlands including Kajiado county.

Dr. Gikungu urged the public to be cautious as the high water levels in the rivers could result in flooding.

He warned that soils socked with water in hilly areas could trigger mudslides and urged the public to be cautious.

This as Kilifi County Government Disaster Management Unit in conjunction with Kenya Red Cross Society has urged area residents living in low lying areas along River Sabaki to be alert over the possibility of flash floods.

The County Director of Meteorology, Ramadhan Munga said heavy rainfall had been forecast in the River Sabaki catchment areas hence floods may occur in the low lying areas that may not be receiving rainfall.

Starlets pooled in Group A of 2022 AWCON Qualifiers

Kapsabet Boys are kings in Rift Valley in 2020 KCSE exam

Ugandan official arrested with ivory worth Kshs.3M in Busia – KBC

Italian woman gets six doses of Pfizer vaccine in error