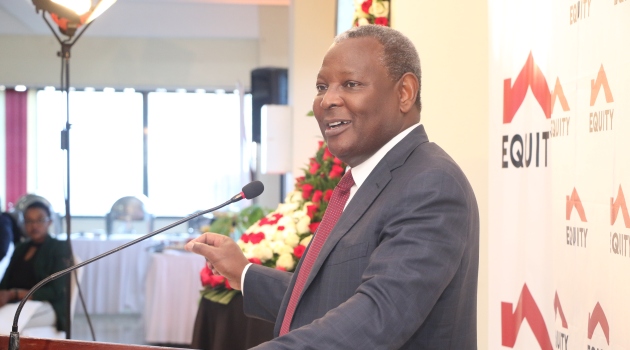 The volume grew by 28 percent compared to the same period in 2018 – when the bank handled Sh79.8 billion-which means that it is now on track to account for equivalent of over half the remittances coming into the country.

Equity Group CEO, Dr. James Mwangi said the lender is leveraging on its fintech partnerships to drive the volume of remittances it is handling.

The direct commissions earned from handling the remittances stood at Sh. 602 Million, having grown by eight percent from Sh. 557 Million in the same period in 2018.

“Commissions are not the focus but rather the focus is access to foreign exchange. What we have seen is that when it comes to our forex dealing, we are overcompensated because 25 percent of all the forex that we deal with is coming from the remittances, giving us an assured source that is helping us become one of the biggest players in trade finance,” said Mwangi at Equity’s quarter three investor briefing on Tuesday.

Overall, Kenya’s diaspora remittance as per central Bank of Kenya (CBK) data stood at Sh215.6 billion in the nine months to September 2019, an increase of 4.4 Percent from the same period in 2018. CBK Governor Patrick Njoroge has in the past attributed the growth in remittances to better transmission channels as more banks make use of fintech to facilitate the inward movement of the cash.

At Sh2.84 billion, forex trading income accounted for 12.6 percent of Equity Group’s total non-funded income of Sh22.6 billion in the nine-month period. In the similar period last year, forex income stood at Sh2.37 billion, accounting for 11.96 percent of the Sh19.8 billion the lender made in non- funded income.

Equity reported a 12 percent growth in the net profit to Sh17.46 billion in the nine months to September, helped by higher interest and non-interest income. KCB Group and Co-Operative Banks have also aggressively ventured in to diaspora market.