By The EastAfrican
More by this Author

Isaack Kamwelwe, Minister for Transport, Communication and Works, said 31 bodies of those recovered from Lake Victoria have been identified and families have collected them.

He was speaking at a press briefing in Ukerewe district, northern Mwanza.

The MV Nyerere sank on Thursday afternoon on its way to Ukara Island from Bugolora Island, in Mwanza.

The vessel, with a capacity of 101 passengers and about 25 tonnes of cargo, is believed to have had hundreds of people on board and many are still missing.

On Friday, the search parties have recovered some 82 bodies, the minister said.

The ferry capsized as it prepared to dock at Ukara with more than 400 people on board.

Senior government officials, including Mr Kamwelwe, the Inspector General of Police Simon Sirro and regional commissioners have been at the shores of Lake Victoria coordinating the search operations.

The ferry is believed to have toppled over when crowds on board moved to one side as it docked but Mr Sirro told journalists that forensic investigations have began to determine the exact cause of the accident.

-Reporting by The Citizen.

Zoo Kericho to appeal against expulsion from league by FIFA  – KBC

FKF Premier league side Zoo Kericho has said it will appeal and seek stay over, following a decision from World Governing Football Body, FIFA, which found the club guilty of having been involved in match manipulation in violation of the FIFA Disciplinary Code (2019 edition).

According to Club Chairman Ken Ochieng, they will take full advantage of the 30-day appeal window to lodge a complaint at the Court of Arbitration for Sports (CAS) under certificate of urgency.

“I will seek stay order execution at CAS because there is a provision to continue with the league when we are still going on with the case,” vowed Ochieng.

The Kericho based club was sanctioned by FIFA over offenses related to a series of matches in the Kenyan Premier League deemed to have been manipulated between 2018 and 2020 by individuals belonging to the club, as a consequence of which the club has been held responsible for the behavior of its members.

“In light of the above, the FIFA Disciplinary Committee decided to expel Zoo FC from the Kenyan Premier League (2020/2021 season) as of the date of notification of this decision and to assign it to FKF Division One for the next season” part of the statement on FIFA website read.

The club further cast aspersions on the report from Zurich referring to it as inadequate and its findings doubtful.

“The events purportedly leading to the charge involve two of the then Kenyan Premier League matches, now known as the Football Kenya Federation Premier League. The first match was played on January 27, 2019, in Machakos between Sofapaka and Zoo and the second was played on March 1, 2020, between Wazito FC and Zoo” read the excerpt of the club release.

The FIFA Disciplinary Committee ordered Zoo FC to contact FIFA in the next 30 days from the notification of this decision and implement a prevention plan as an educational directive designed to prevent and combat the manipulation of football matches and competitions.

The formal disciplinary proceedings against the aforementioned club stemmed from an investigation conducted by FIFA through its Integrity Department, in cooperation with the relevant stakeholders and authorities and in accordance with mandate conferred upon it by the Football Kenya Federation and the Confederation of African Football. NAIROBI, Kenya May 5 – Keya announced Wednesday that it had detected cases of the Indian covid-19 variant days after banning flights from the country.

“Indian variant, yes, this variant has been picked in Kenya and because of global connectivity, it is just a question of time. You cannot be able to place barriers to prevent a virus from accessing your territory,” Amoth said. 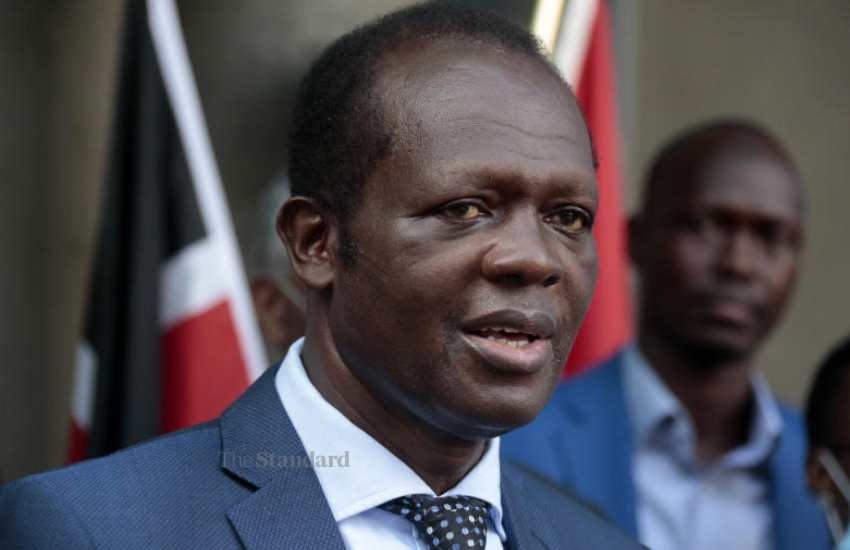 The ruling Jubilee Party will next week Saturday conduct nomination to pick a candidate for the Kiambaa by-election after five aspirants declared interest in the race.
Party Secretary-General (SG) Raphael Tuju said the said aspirants have applied to run on the party ticket in the poll occasioned by the death of MP Paul Koinange.
Three of the five aspirants are members of the Koinange family, putting the ruling party in a political dilemma.
June Koinange, the widow to the late MP, Lenah Koinange, daughter of former Cabinet Minister Mbiyu Koinange and her niece Damaris Wambui have declared interest in the seat.
The ruling party has traditionally backed relatives of deceased politicians in by-elections occasioned by death, at least going by recent past mini-polls.
In Garissa, Jubilee backed Abdulkadir Mohamed Haji following the demise of his father Yusuf Haji while in Juja, Susan Njeri Waititu, the widow of Francis Munyua alias Wakapee, will fly the Jubilee Party flag for the by-elections slated for May 18.
The party also sponsored Lucy Ng’endo Chomba, the widow of the late Huruma Ward MCA Peter Chomba to inherit the seat.
Tuju said that the party will conduct nominations to pick the most popular candidate among the five to represent the constituency for the remaining one year.

“I don’t think we will have any problem because what we will do is a credible nomination process. We want to assure all the aspirants that we will do a credible process in identifying the right candidate,” said Tuju.
“Our interest is the electorate, whom do they want. We have no bias and emotions attached to the process,” he added.
The Independent Electoral and Boundaries Commission (IEBC) has set July 15 as the date for the Kiambaa by-election.
June, who unsuccessfully contested for Kiambu Woman Representative in 2013 and 2017, said she was prevailed upon by the people and opinion leaders to run.
She is banking on grassroots networks and involvement in various projects to support locals to clinch the Jubilee ticket.
“There have been many discussions in Kiambaa that have brought together voters as well as thought and opinion leaders. The people have agreed that they need a strong personality to complete projects started and initiated by the late Hon. Paul Koinange’’ said June.
She said voters should be allowed to pick the best candidate without them being labelled as members of the Koinange family.
“People should not look at us as the Koinange family. There is also no need to convince or prevail upon others to drop their bid. Our family is big and those who see themselves as leaders should be allowed to run. Let the people decide at the ballot,” she explained.
The family is said to have settled on Lenah to vie for the seat on Jubilee Party ticket.
Leonard Karuga, the family spokesperson, said that at least 10 members of the family had shown interest to in the parliamentary race but agreed to back Lenah.
But June said her declaration for the seat came late as she was still mourning her late husband, adding that the decision to vie was triggered by “pressure from family members, Kiambaa residents, voters pressure, national agenda and prayerful considerations.”

Zoo Kericho to appeal against expulsion from league by FIFA  – KBC

Most expensive celebrity divorces of all time Eve woman