Goods from China, Saudi Arabia, India, South Africa and Japan accounted for 80 per cent of imports last July even as the countries made insignificant purchases from Kenya.

Machinery, construction materials and consumer items were among items worth Sh35.3 billion bought from China making up 33.14 per cent of the total Sh106.5 billion. They were followed by Saudi Arabia that mainly sold petroleum products valued at Sh21.45 billion.

China accounts for 25 per cent of Kenyan imports bill under the current common external tariff structure of zero per cent, 10 per cent and 25 per cent for raw materials, intermediate goods and final goods respectively.

Rwanda received goods worth Sh1.4 billion from Kenya, while the Netherlands bought goods worth Sh3.62 billion and exported to Kenya Sh1.3 billion cargo.

Data by the Central Bank of Kenya reveals that the inflows represent a 43.7 percent increase from remittance sent in April 2020 and 2.9 percent rise in March 2021.

The Initial Pricing Thoughts (IPTS) were announced at T+220bps area and T+250bps area for the 5-year and 10-year tranches, respectively. Backed by strong demand, the combined books peaked at US$5 billion, with a slight skew towards the 5-year tranche, seeing pricing set at T+185 bps to a re-offer yield of 2.634% and T+220bps to a re-offer yield of 3.798%, respectively. The 10-year tranche was finally priced at only a 5bps New Issue Premium (NIP), while the 5 year was priced flat to fair value.

The transaction is a major milestone for Afreximbank, marking the second time that the Bank has accessed the 144A US market and is the Bank’s largest transaction in the debt capital markets to date. It fulfils a number of key objectives of the Bank’s Liability Management strategy, which include diversification of the liability book by geography, investor type and tenor as well as reducing cost of funds.

Speaking after the closing, Mr Denys Denya, Afreximbank’s Executive Vice President responsible for Treasury, said: “This landmark deal confirms continuing investor deep confidence in Afreximbank’s mission and credit story, and achieving competitive pricing for both tranches is testament to the strength of support from investors from all key financial markets across the global.  Importantly, the success of this transaction enables the Bank to continue to play a major role in the development of intra-African trade as well as trade between Africa and the rest of the world.

Prior to pricing the transaction, Afreximbank met with both new and existing investors during well-attended virtual roadshows covering the Africa, Gulf countries, Europe, Asia and USA. The Bank received overwhelmingly strong feedback, noting confidence in Afreximbank’s credit profile and strategy. Investors also complimented the Bank in helping its member countries adjust to the shocks caused by the COVID-19 pandemic, through its Pandemic Trade Impact Facility (PATIMFA). 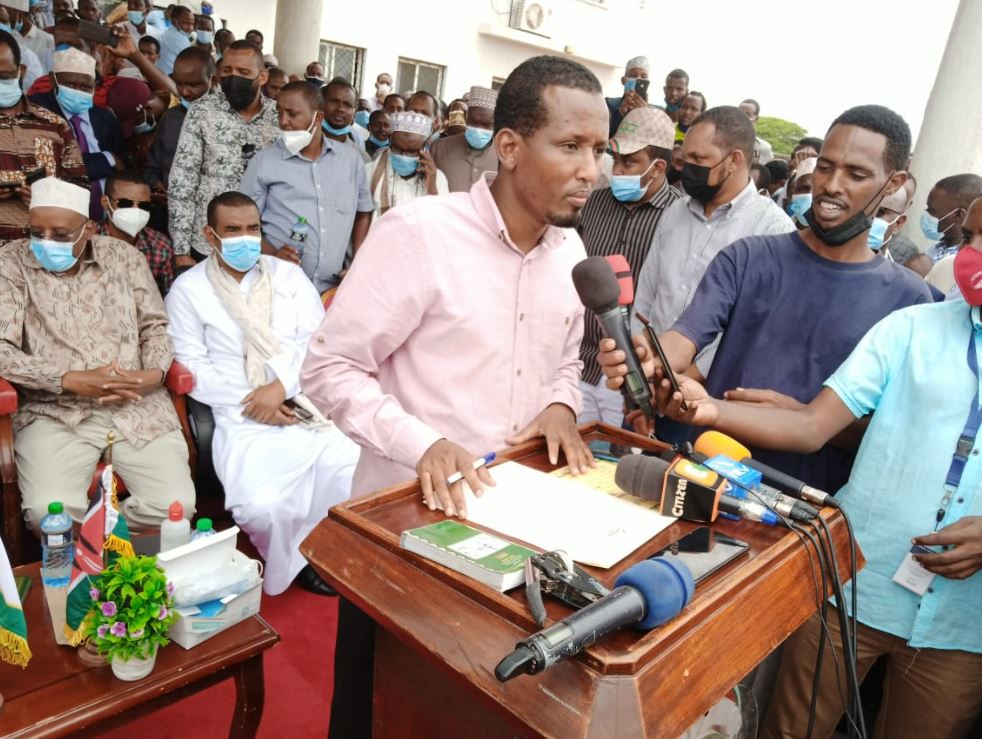 Mr Ahmed Ali Muktar was on Tuesday sworn in as the third governor of Wajir County after the Senate gazetted the impeachment of former county boss Mohamed Abdi Mohamud.

The swearing in ceremony took place at the Wajir County headquarters.

In his first speech after taking oath of office, Mr Muktar said he will prioritise water, health and education sectors in his administration.

“My pledge of service is premised on objectivity and professionalism. I appeal for your support,” he said.

The new governor also pledged to uphold the unity of Wajir people and help resolve the health crisis in the county. Healthcare workers have been on strike for the last one week.

“I will meet the health workers today with a view of addressing their issues. I will desist from nepotism and skewed allocation of resources which erodes people’s confidence,” he said.

On Monday, 25 senators voted for the governor’s ouster after he was found guilty of gross violation of the Constitution.

Nyamira Senator Okongo Omogeni, who chaired the special committee that investigated the governor, abstained from the vote.

Others who skipped the vote were senators Ochilo Ayacko, James Orengo and Mutula Kilonzo. Senators Samson Cherargey and Kipchumba Murkomen voted to save the governor.

“The net effect of the vote is that Mr Muhamud has been impeached and he ceases to hold office,” Senate Speaker Kenneth Lusaka ruled after the vote.

A special committee of the Senate, which upheld his impeachment by the Members of County Assembly (MCA), recommended Mr Mahamud’s removal from office for endangering the health of the people of Wajir.

The MCAs, through witness Hussein Dahir Abdirahman argued the health sector is in deplorable condition despite being allocated a total of Sh2.4 billion since 2018, equivalent to 22 percent of the budget.

Who will be Samboja running mate 2022? – Weekly Citizen

Sauti Sol’s Polycarp shares video of his wife in labour, preparing for a water birth