Downtrends are caused by prolonged selling pressure. When demand for a financial instrument does not match the supply for a lengthy period of time, the instrument suffers from a protracted and consistent decline in market price. A number of factors, either in the arrangement of a constant and random bombardment of occurrence-based news or withering fundamentals lead to the sustained evaporation in positive sentiment:

The general understanding is that investors analyse news in order to conclude a real threat to financial health.

The country’s State controlled electricity distribution monopoly has recently been in the eye of the storm. With scandal after scandal tainting the corporation’s image over the years; the most recent tender related scandal leading to the arrest of the company’s entire top management. Kenya Power and Lighting Company Limited had been entering into onerous Power Purchase Agreements (which tie the distributor to procure electricity from and pay Independent Power Producers capacity revenue for years into the future). It had also been incurring distribution losses of about 19% against a global norm of 10%.

All this has led investors to believe that the high cost of electricity in Kenya is a bubble. Deferment of fuel costs in an election year (Kshs. 10b in 2017) and attempts at retrospective recovery have brought to the fore the intermingling of financial and political risk on this counter; accentuated by high debt and low profit margins. Its half year results for 2018 presented one of the worst negative cash balances in the company’s history; Kshs. -7.7b (-937% from a similar period). Most analysts have been alluding to the full year dividend of Kshs. 0.50 when giving roseate price targets. 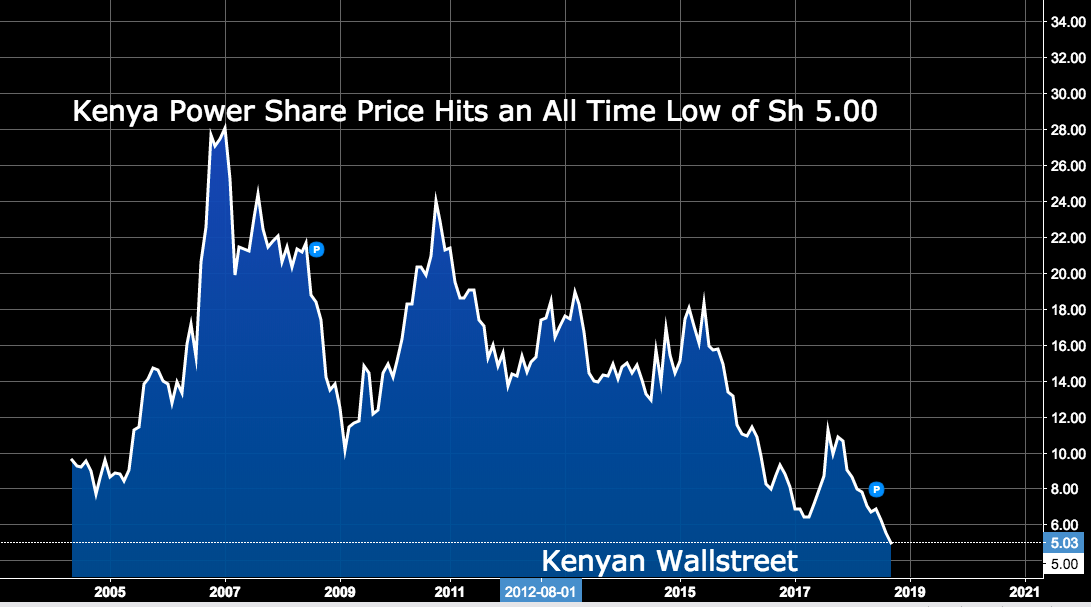 KPLC’s share price has plunged from a high of Kshs. 12 towards the end of August 2017 to an all time low of Kshs. 5. The PE ratio is under 2, which is egregious! Units of power sold have increased from 4.8B KWH in 2007 to 7.7B KWH in 2017 (+60%). However, customer numbers have grown from 924,000 to 6,180,000 (+569%) over the same period and the growth disparity is immediately noticeable. Basic and diluted EPS has grown at a rate of 9.53% compounded annually over the last five years. Government control over electricity is a very important political tool. The existence of State guarantees and government goodwill to secure funding from large partners including the Akinwumni Adesina led African Development Bank create a very unimpeded entity with 51% government ownership.

The rate at which growth in PAT is slowing is remarkable!

While units of power sold have been growing consistently over the past 10 years (10y CAGR of 4.83%), the slowdown in PAT indicates the following:

Net profit margin has oscillated at around 6% over the last four financial years.

Gross profit has also been on a downward trend, in line with revenue:

Fuel costs have a 3y CAGR of 17.20% (10y CAGR of 4.67%) indicating that the thermal cartels have flourished under the Jubilee government. Foreign exchange costs and fuel costs are pass through costs to a certain extent. Total power purchase costs grew at a 3y CAGR of 2.81% which indicates that the gross profit is not where the main losses are. KPLC is trading not only below its stash of retained earnings but also its gross profit and EBIDTA which is undervaluation worthy of indignation.

The effective tax rate for KPLC is consistently above 30%, which displays that KPLC’S earnings are not due to tax advantages. The average dividend pay-out ratio is 17.91% over the last 10 years (low=sustainable). Dividend has been constant since 2012. For the last 6 years, the highest earning yield and dividend yield registered by KPLC at the financial year end was 46.79% and 6.29% respectively (2017). Current market price deviates from the historical norm.

In the FY 2017, KPLC had a recoverable foreign exchange adjustment (classified as non-current asset) of Kshs. 6.5b up from Kshs. 6.1b (FY16) and Kshs. 5.2b (FY15). These are unrealised gains on foreign exchange denominated loans.

PPE makes up 77.48% of total assets. These include capitalised labour and transport costs and thus assets are reported as crystallised costs designed to generate returns.

While the attention is focused on the unrecovered fuel costs mentioned above, the last financial year end also included unrecovered VAT of Kshs. 4.3b from Kshs. 1.9b in a similar period (+126%).

While KPLC is well known for its negative working capital, customers often pay for services in advance and this is therefore a current liability.

The monopoly corporation needs to do something about its borrowing, the stock of which totalled Kshs. 122b in the FY16/17, attracting finance costs of Kshs. 5.65b, equivalent to 51.78% of profit before tax and 77.74% of profit after tax. 73% of the company’s debt in those reported financials was dollar denominated and recent management sensitivity analysis indicates an effect of about Kshs. 1b on profit before tax and equity from a 1% change in the currency interest rate. In the financial year ended 30th June 2017, similar management sensitivity analysis indicated a Kshs. 4.48b effect on profit before tax and equity from a +/-5% appreciation/depreciation in the greenback.

Return on Assets shows how well a company is sweating its assets and is calculated as:

Net income/Total assets. The four-year downtrend started in 2014 when the indicator was at 3.25%, falling to 2.27% in the most recent results. The assets are not generating sufficient sales nor is net profit margin high enough to justify the huge calcified costs in the balance sheet.

Return on equity has deteriorated over the past three years from 12.85% in 2015 to 10.72%. The high equity multiplier of 4.68 in the FY16/17 shows that the return on equity is debt fuelled and it has consistently been so. Asset turnover has declined from 0.80 in 2007 to 0.38 in 2017. The total debt to equity ratio of the utility has ballooned to 388.34%. However, interest coverage also known as “times interest earned” was 2.93 in the most recent year end results, which is still safe for creditors of the company.

How do we exploit a downtrend? “We buy at the point of maximum pessimism” – John Templeton. Our conviction must separate fundamentals from emotions and there is a price at which even penurious and retrograding financials are attractive. We would like to play it safe and set a price target of Kshs. 8.45 based on the EBIT of the financial year ended 30th June 2017.

By @MihrThakar and William Momanyi