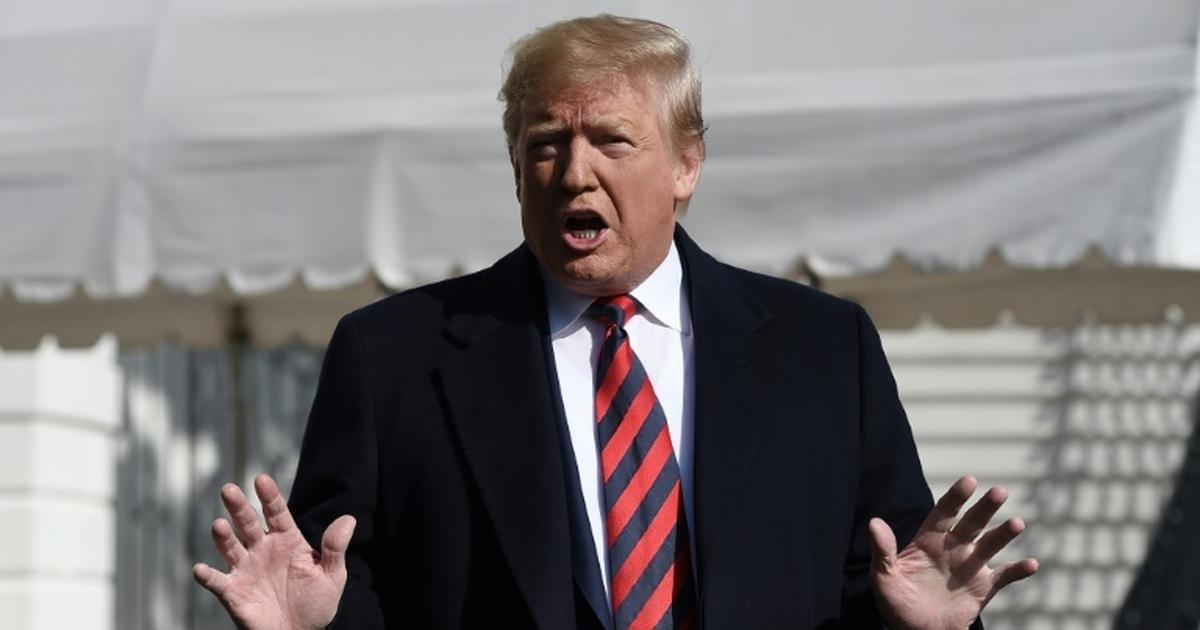 After a week of dramatic impeachment testimony from current and former administration officials, an embattled Trump took to a favorite broadcaster to air a long, occasionally incoherent list of grievances — against the FBI, his political adversaries, impeachment inquiry leaders, the “deep state,” and more.

“These people are sick,” Trump raged down the telephone line to Fox at the start of a 53-minute tirade that showed how angered and unsettled he has been by an impeachment inquiry that threatens his presidency.

But with many Republicans seemingly unmoved, Trump bashed the testimony as “total nonsense” and said he relished the chance to defend himself.

Impeachment in the Democratic-controlled House of Representatives appears increasingly likely in the coming weeks or months.

But removing him from office would require conviction by a two-thirds majority in the Republican-controlled Senate.

‘Crazy as a bedbug’

The increasing prospect of becoming only the third US president formally impeached, after Andrew Johnson and Bill Clinton, has riled the brash New York billionaire, and he fired off multiple attacks against rivals leading the effort.

His main Democratic nemesis in Congress, House Speaker Nancy Pelosi, is “crazy as a bedbug” for pressing a “scam” impeachment, he fumed.

House Intelligence Committee chairman Adam Schiff, who has presided over the public phase of the inquiry? A “nutjob” and a “sick puppy” who should be sued for having “lied” about the president’s “flawless” Ukraine call, Trump added.

Trump was quick to say he “hardly” knows several of the witnesses, including his own ambassador to the European Union Gordon Sondland, who said Trump sought a quid pro quo from Ukraine.

But he rushed to the defense of his personal lawyer Rudy Giuliani, who has emerged in many accounts as having orchestrated the shadow policy to pressure Ukraine.

“Rudy is a great crime fighter,” Trump said, giving an unqualified endorsement to one of the most controversial figures in the Ukraine saga.

“He is a friend of mine. He is a great person, an iconic figure in this country,” he said of the former New York major.

Trump also repeated the conspiracy theory that Ukraine, not Russia, interfered in the 2016 US election — just a day after a former National Security Council expert, Fiona Hill, denounced that in testimony as a “fictional narrative” advanced by Russia to harm the United States.

“They have the server from the DNC — Democratic National Committee,” Trump said of Ukraine, claiming that Democrats gave the computer to “a company owned by a very wealthy Ukrainian.”

The claim appeared to alarm Fox hosts, including Steve Doocy.

“Are you sure they gave it to Ukraine?” a skeptical Doocy asked Trump.

“That’s what the word is, and that’s what I asked actually in my phone call,” Trump responded, referring to his July 25 conversation with Ukrainian counterpart Volodymyr Zelensky at the heart of the impeachment inquiry.

Trump mentioned his political rival Joe Biden to Zelensky and pressed the new president to investigate a Ukrainian firm where Biden’s son worked while his father was vice president.

Democrats argue that Trump’s demand that a foreign leader investigate his potential adversary in the 2020 presidential election is impeachable conduct.

Trump has said he was merely pressing Ukraine to ramp up its anti-corruption efforts. But he also claims the Bidens were involved in corruption.

There is no evidence to back up the assertion, but Trump nonetheless repeated it on Fox, saying “you have to say Joe Biden is corrupt.”

Biden, who leads the Democratic 2020 nomination race, has said Trump has smeared him with corruption allegations because he fears a Biden candidacy.

But Trump seized on polling released this week that shows him winning in hypothetical matchups against Biden and other Democrats in battleground Wisconsin, a state Trump flipped in 2016 but which Democrats aim to retake.

S.Africa court to rule next week on Zuma’s appeal against graft trial

Nyandarua has set aside Ksh 2.4 billion to fight the impact and the spread of Corona Virus in the county.

Governor Francis Kimemia disclosed that part of the funds has been used to procure ventilators, PPEs and masks in stepped up efforts to contain the disease, as the Country braces for Covid-19 peak from next month.

“Apart from procurement of equipment, we have set aside Ksh.230million to fight this pandemic, which means the county has to put on hold other ongoing development projects,” he stated.

Kimemia spoke on Monday during the Good Morning Kenya show aired on KBC Channel 1 where he gave an update on the County’s preparedness against COVID-19.

Additionally, the county has managed to install an Intensive Care Unit (ICU) with 15 beds and nine ventilators as well as an isolation facility with 330 beds in case the pandemic escalates.

More than 8,000 water tanks have been installed in various markets in the County to ensure adequate hand washing in line with the Ministry of Health safety guidelines.

Kimemia said surveillance had been intensified at the County’s 10 border points to check movement of people in and out of the County.

This, he said will make contact tracing easier in the event of a positive case.

The County is also working closely with officers from the Nyumba Kumi initiative to sensitize the communities against stigmatization of COVID-19 victims and taking proper precautionary measures against the disease.

He further appealed to the people of Nyandarua County residing in Nairobi or other areas to avoid visiting their parents and the elderly in wake of COVID-19.

Kimemia says that young people could unknowingly pass the virus to their elders leading to more infections.

He advised them to use phone communication and mobile money transfer at least until the decline of infections in the Country.

“While I acknowledge that we cannot stop children from visiting their parents at the same time we highly encourage them to keep staying where they are,” he stated.

“It is advisable that the middle class working in Nairobi and other counties to minimize interactions with their parents and grandparents until we see how this disease is contained,” Kimemia said

A previous statement by the Council of Governors Chairperson Wycliffe Oparanya revealed that only 26 Counties have been able to put up a 300-bed isolation Center in line with President Uhuru Kenyatta’s directive.

Currently, Kenya has 10,294 COVID-19 cases and Health officials have warned that easing the lock-down measures could lead to an increase of infections and deaths.

However, this could be avoided by adhering to all safety protocols put in place by the Ministry of Health. In the majestic plains of the Maasai Mara, the coronavirus pandemic spells economic disaster for locals who earn a living from tourists coming to see Kenya’s abundant wildlife.
Even before the virus arrived in Kenya mid-March, tourism revenues had plummeted, with cancellations coming in from crucial markets such as China, Europe and the United States.
According to the tourism ministry, the sector has lost $750 million this year — roughly half of the total revenue in 2019.
“We were fully booked in June but now we have zero bookings. Nothing. It’s terrible,” said Jimmy Lemara, 40, the manager of an eco-lodge in the private Ol Kinyei conservancy.
In the Maasai Mara, one of Africa’s most highly-rated wildlife reserves located in the vast flat plains of the Great Rift Valley, the local Maasai community, traditional herders who make up 2.5 percent of the population, now depend almost exclusively upon tourism for their livelihood.
In a unique model set up to engage local communities in tourism, enabling them to see the value of wildlife and thus protect it, the Maasai now get revenue from renting their land to form private wildlife conservancies.
Some work as cooks, guides and security guards in the lodges while others give tours of their traditional homes or sell homemade crafts to tourists.
‘SURVIVAL MODE’
People in Talek, a dusty town situated at one of the entrances to the Maasai Mara national reserve, are gloomily buckling down, hoping for better days.
Kenya has announced international flights will resume on August 1, but the high season is already lost.
“Since December, work has been extremely low, and now we’re in survival mode hoping to make 150 to 200 shillings ($1.4 to $1.9) a day, to be able to buy a meal,” said Ibrahim Sameri, 38, whose small mechanic workshop can generate up to $30 a day in the high season.
Nalokiti Sayialel normally sells bead necklaces and bracelets to tourists passing through.
“It’s been three months that I haven’t sold anything,” the 45-year-old told AFP.
“This is terrible. Everything is stuck. Everything is shut down. (I have) never seen something like that”, said tour guide Petro Nautori who has had no work since January.
The Maasai Mara national reserve, run by the Narok county government, extends to the north with several privately-managed conservancies renting land from the Maasai who in exchange do not graze their cattle or settle there.
This model has since 2005 allowed the doubling of the habitat for wildlife in this area.
On average, each land owner earns $220 per month, far more than the minimum wage in the area.
However like other conservancies, Ol Kinyei is struggling and has agreed to only pay half the usual rent to the Maasai, after having to pay back deposits to tourists who cancelled their holidays.
The salaries of lodge employees have also been cut by half.
FORCED TO SELL LIVESTOCK
Some Maasai families are having to turn to selling their precious livestock to earn money.
“Because we’re getting little and it’s not enough to sustain the family for a living, I had to sell two goats worth about 12,000 shillings to put on top of what I’m getting to keep me going,” said Julius Sanare, 41, head chef at the eco-lodge in Ol Kinyei.
However livestock markets have been shut due to coronavirus prevention measures.
Residents said the Maasai are instead selling their animals on the black market for a pittance to unscrupulous buyers taking advantage of their desperation.
Mohanjeet Brar, managing director of Porini safari camps which run two conservancies and several lodges in the Mara, said the “catastrophic” situation could threaten the existence of the reserves.
“If the landowners are not getting any revenue, they can’t feed themselves, they can’t send their kids to schools, they would have no option but to look at other forms of land utilisation,” he said.
“Fencing it off, selling it to people, building businesses… all those alternate land uses don’t go together with wildlife and elephants and big cats and so this would be completely lost,” he said.
“And once it’s lost, if you look at Kenya and its very fast population growth rate and good economic growth over the last few years, it would be lost forever. It would be a real shame.”

It was an all black affair for medics in Kenya as they laid Dr Adisa Lugaliki to rest after she succumbed to Covid-19 which she contracted in the line of duty.

The mother of two became the first doctor to succumb to Covid-19 throwing the medical fraternity into a frenzy.

As a way of paying tribute to their friend and colleague, medics chose to wear black.

‘For Adisa! Escorting her back home.Thank you @lizwala for representing us. It is a black affair for our beloved Dr.Adisa.’

Below are photos of different medics in black in honour of Dr Adisa.